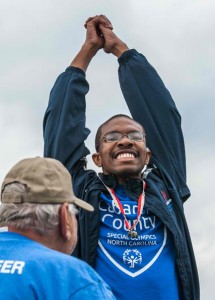 He will represent North Carolina in the 2014 Special Olympics USA games in Princeton, NJ in cycling.

Special Olympics North Carolina used the advancement criteria set forth by Special Olympics, Inc. to select the athletes who are a part of Team NC.  Gold medal winners from all ability level divisions were put into a random drawing in order to be selected for participation in the Games.

Special Olympics NC is asking for support in an effort to reach a $100,000 goal to send Team North Carolina to the 2014 USA Games.All proceeds will be used for expenses related to travel, housing, meals, uniforms, and sports equipment.  If you would like to make a contribution online in support of the team or a particular athlete from your community, please visit http://www.firstgiving.com/sonc/teamNC.  Offline donations can be mailed to SONC, Attn: 2014 USA Games, 2200 Gateway Centre Blvd, Ste 201, Morrisville, NC 27560. All donations are tax-deductible.

Permanent link to this article: https://www.wofwc.org/2014/04/darrius-robinson-heading-to-new-jersey/

WOFR.org - Word of Faith
Radio Pop-Up Player
Please disable any Pop-Up Blockers
CLICK HERE
This Pop-Up Player will allow you to listen to the stations as you continue to use your browser, or go to other web sites!

Tune in to the SpeakFaith.TV Live Internet Streaming TV Channel at: https://sftv.io